What a night for Robert and his polish team Motor Lublin. After last weekends defeat with being 14 points behind, the team was able to fight back those 14 points and finish the final with 91:89. Robert rode 12 points and through his win and AJ (Andreas Jonsson) finishing third, they won the NICE 1. LZ.

“Ruthless” started with a strong win but a third place followed. In his third ride he rode brilliant collecting another three points.
In heat 13 he couldn’t pass Andrzej Lebiediew and rode two points home. However, in heat 14 David Lampart and Pawel Mieciac started straight from the tapes into a 5:1 but in the second round Lampart had been passed by Batchelor and it did not take long when Szczepanik followed. 87:87 was the score after heat 14. You can tell, it was pretty exciting for the fans. Lambert had a good start and rode over the startline into the promotion.
In the back Jonsson and Lebedev where still fighting over the second place, but did not matter.

Speed Car Motor Lublin will be at PGE Ekstra League after 24 years!

After riding at Daugavpils two weeks ago Lublin rode at home on Sunday 20th of may.
To be honest, there is not much to say to the meeting. They won by 69:21! It does tell everything. The whole team rode great. Robert has got two points in his first heat followed by another second behind his team partner Sam. He then won his last two rides. That makes 10+1. Only dropping one point out of 4 rides. It is really incredible how Lambert’s form is at the moment. It seems like he is doing everything right to be on fire. We are looking forward to tonight for the meeting at Manchester.

For the second time Robert had been riding at Daugavpils.
He started with two payed seconds but then in his third race he had got a second followed by a win. In heat heat 15 they needed a 5:1 to win the match. And that is what exactly they did. Robert and his team mate got a 5:1! – ANOTHER WIN FOR LUBLIN!!

Yesterday, it was hard to start for me but luckily I’ve improved in the meeting and won the last heat. You need to start good if you wanna rin at Daugavpils. I am happy that the team won and I am looking forward to the next meeting with them.

This time the polish home meeting took place on a Friday rather than on a Sunday. Robert was put as number one in the team like he has been in Gdansk. In his first race a got a last followed by a third. Everyone was thinking: “Whats is wrong with Robert?”. But in his third heat he showed hoe hard he was fighting for the first place. He nearly got Troy  twice. – Exciting race! Robert made everyone scream when he went out and won his forth race. There he is again, our Ruthless. After heat 14 and Roberts second win it was sure the team won. At the end the Team won by 48:42, with Robert having 0,1,2,3,3.

What do you think about the meeting and what was wrong in the first two heats ?

I couldn’t find the set up in the first two heats. But we then changed some things and it worked. I was really happy to be have a couple of wins in the meeting. I ended up having 9 points which is nearly what I had the first meetings so can’t complain about it just trying to get better. See what we can do in Daugavpils. 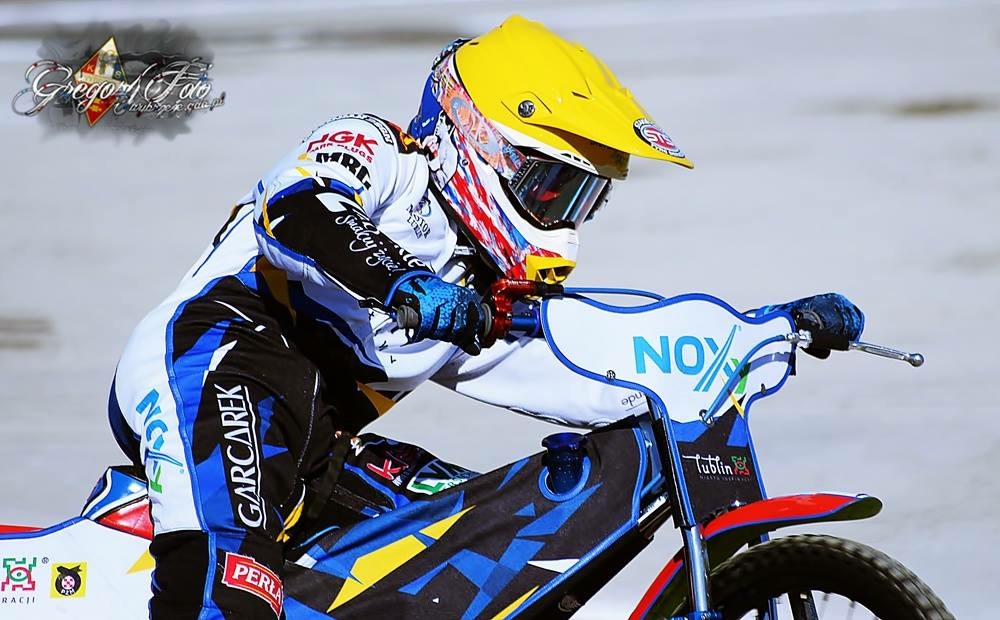 First away meeting for Speed Car Motor Lublin. The Team won by 43-47. For Robert it has not been a successful meeting as he only scored one point.
He was sad about it but as its early in the season he needs to keep is head held high and make it better for the next meeting. Which will be on Wednesday at King’s Lynn, where he is hoping to find his feet again to score many points.

I know I had a bad meeting, but that can happen. I just could not find the right set-up. But the fans made me happy as I only received good messages and comments. They are behind me what ever it is. Which is really good. I really appreciate it. Thank you.

Another Sunday, another League meeting. Today Motor Lublin raced against Car Gwarant Start Gniezno. Roberts was chasing Adrian Gala in his first heat but Robert came second. A win followed easily. Then in his third race he started fast out of the bands and was attacking Pavlic. However, he slowed down in the second corner and stopped.- Ignition issues as we got to know later. In his last heat he showed once again to what he is able with a nice smooth win. Lambert was put into heat fourteen and got second. In summary it makes another ten points for the twenty year-old boy.

I think it was a great meeting. The team did a good job today. I had one problem with my bike what I don’t understand but this happens. I won my next heat and was fast. I always feel good with the Lublin fans they give me a great response. Thank you for that!

The first league meeting of the season with team Poland and Robert rode brilliant. First heat he went out of the bands like rocket and was holding that position until the end. At the end it was a five one for the team. The whole Team started good until the middle. Anyway, Robert got in his following heats a second and another second behind his team mate. In his fourth heat he needed to fight Lodz alone as his team mate who was supposed to ride ended the meeting after he crashed. Robert was the first out of the bands and rode the three points for his team home. Unfortunately, his chain came off at the start in heat 15. However his Team mate AJ saved the team from loosing by getting a win and the meeting ended 45:45. Robert collected 10+1 points. He says :

It is alright how the first meeting went but I am really pissed about heat 15. Something like that should not happen. Of cause it does with everyone but I am trying to prevent those things. I am now off to the airport to catch my late night flight to London to ride at Belle vie tomorrow night.

First meeting of the season!

On the 30th of March 2018, the first meeting of the season took place for Robert Lambert. Two Test matches were supposed to be held in Poland but after the bad weather conditions and snow the had been cancelled. A new test match git arranged with Częstochowa.
Robert went out into his first heat. However, luck was not on his side, when a polish youngster crashed into him and he picked up and went off bike. Nothing had happened, only the bike is bend. He was able to do the re-run and got third. Followed by a win a second and a win again, Unfortunately, the Team has lost. Częstochowa scored 49 points and Roberts Team 29.
Robert scored 9+1 for his Team. Which is not remarkable for his first meeting in the first league in Poland. People can only imagine to what else he is able without a crash. Now we have one question:

“Is everything fine after your crash and how was the feeling of the first meeting of the season ?”

Everything is fine, after the meeting I didn’t feel any pain so that good. What is not so good is that my bike git bend in the first heat. Of cause better than me but still. It felt pretty much like I’ve never stopped riding! So I feel really comfortable and I don’t think I did too bad for the first meeting in first league in Poland. But I want to be better!! I am always chasing after the best result possible so I am nit satisfied anyway. I am now looking forward to my next meeting on Monday in England.

Big thanks to Kowalski for the pictures!

This website uses cookies to improve your experience while you navigate through the website. Out of these, the cookies that are categorized as necessary are stored on your browser as they are essential for the working of basic functionalities of the website. We also use third-party cookies that help us analyze and understand how you use this website. These cookies will be stored in your browser only with your consent. You also have the option to opt-out of these cookies. But opting out of some of these cookies may affect your browsing experience.
Necessary Always Enabled

Any cookies that may not be particularly necessary for the website to function and is used specifically to collect user personal data via analytics, ads, other embedded contents are termed as non-necessary cookies. It is mandatory to procure user consent prior to running these cookies on your website.